This week, we decorated Meggie's Special Place for Christmas.  Timing is important, for if the ground is frozen, we can't 'plant' the fake tree!  What is her special place?  So glad you asked!

It began like this...Ever wonder how you explain a casket and cemetery to a 3-year-old and and six year old after their sister has died unexpectedly?  How you prepare them for ceremonial rites of death like the wake, funeral and burial?  Probably not.  Unfortunately, I had to do just that.  Little did I know my knee-jerk and intuitive explanation would evolve into such a beautiful part of honoring Meghan's memory.

First, let me say, there were plenty of people who told me not to bring the kids.  Hello?  Really?  Why not?  She was a huge part of their lives.  Granted, no one likes death, wakes, funerals or grief stricken parents, but not having them there was not about 'protecting' them, it was stemming from the discomfort of those suggesting it with death in general.  I *knew* they needed to be there, to be a part of the ritual, to understand it as best they could for it would be with them for the rest of their lives.  Sheltering them from it served no one but those who wanted to shelter themselves.

In order to prepare the kids for her wake, I explained that when people die, their bodies stay on earth, but their soul, their energy, that essence that made them who they were moves on to a different place where they are free and happy.  On earth, we have a ritual where we visit their body one last time to say goodbye before we place it in the ground for safe keeping.

I explained that people get a 'special box' for their bodies.  Meggie's was a beautiful white box with gold angels on the corners.  I didn't pick it out.  The funeral director did, and in fact, gifted it to us I later found out.  It was lined with white satin, of course, and held Meggie's body for her special good-bye day.  I dressed her in her favorite things.  Bright pink pants with huge daisies one them, her favorite pink shirt and her fleece kitty sweatshirt.  I put pink socks on her and the pink slippers I had gotten her for Christmas, that she never saw, and probably would have loved to take off, on her feet.

We opted for an open casket, because I wanted to look at her.  This freaked a good number of people out for they thought it would be a closed casket.  I'm not sure why. Yes, it's shocking to see a child laid out in death.  If it bothered them I didn't much care.  She was mine.  It bothered me immensely that she was dead and dammit I wanted to gaze at her beautiful face as long as I could.  I admit, I vacillated on it initially, because I was torn about upsetting people.  The funeral director was great, he asked, "What do YOU want?  She's beautiful, she's view-able and she's yours.  It's about what you want, not what might make someone else feel better or uncomfortable".  Loved him.  Done and done.  I was so relieved! The boys had quiet time alone with us and her to get used to it.  They touched her kitties, her hair.  Her twin kissed her forehead and gave her one of her own prayer cards.  Her older brother investigated the curtain behind her.  They each 'adopted' one of her kitties to care for. She was buried with her two favorite.

She had her two favorite stuffed kitties and her yellow blankie with her name on it snuggled in with her.  She was covered with her pink flower blanket she slept with every night.  On her wrist was a bracelet made by her aunt that day with her name that I now wear.  It was adorned with pink flowers and the Marie kitty from the Aristocats that I had gotten her for Christmas as well, another thing she never saw, but would have loved.

On the day of her funeral, I explained how her special box gets put in the ground at the cemetery and that she would always have a special place where we could visit her body.  Her spot was chosen haphazardly given the winter, the snow on the ground and the fact I was not exactly functioning rationally.  It was surreal and intensely maddening to be picking out a cemetery plot for my daughter at all, let alone just days before Christmas.  The cemetery worker suggested a spot between two former Veterans and I liked how they would 'protect' her.  Done. I couldn't get out of there fast enough that day...

Her special box was indeed beautiful and fit for an angel. 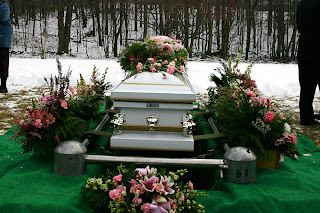 From then on, it was known as "Meggie's Special Place".  Given she was buried December 22nd, when we went back the next day to 'decorate' and visit for the first time, we discovered one of our neighbors had placed a small pine tree there for Christmas and it already had some ornaments.  We added some more.  If I could find that picture easily, I'd post it!  It was a "Charlie Brown" tree, but it was perfect.

Every year, we add ornaments to the Christmas tree at her special place.  We now have a 'fake' tree that is pink!  As tacky as it is, SHE would have adored it!  It even has solar lights so it shines brightly in the night! You can see it from the road.  It always makes us smile and we're pretty sure it'd make her smile too.  The boys decorated it this year.  It looks like 2 boys did it.  I'm sure many of the ornaments will fall off.  :-)  As I handed them to the boys to place on the tree, I remembered who left them or gave them to us or why we purchased it. There are lots of kitties and Tinkerbell ones.  Pinks and purples.  Sparkly ones, hand made ones and ones chosen from someone's own personal collection just for Meg.  Some I don't even know where they came from, they just show up on the tree, donated by strangers or those who know us but didn't tell us of their visit. 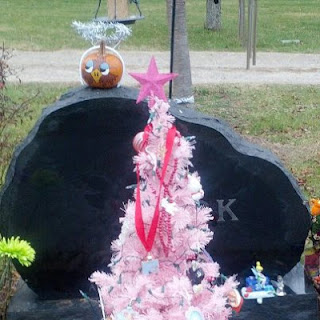 This year's tree has a pumpkin angel accompanying it!

She now has 'neighbors' all around her.  Directly across from her is a stone with a Santa Claus etched on it!  We thought it odd until we looked at the back of his stone.  There is a photo of the gentleman and he had a bushy natural white beard!  He DID look like Santa!  I imagine he loved to play Santa for the kids.  How he'd have loved her and she, him.  It makes us smile to know "Santa" is across from her!

Choosing a stone is harder than you think.  It's a shopping trip no one wants to make and it's costly for a hunk of granite!  So many choices, it was overwhelming.  We ultimately chose a funky shaped one, it reminded me of Meg's quirkiness.  See that little fuzzy bit on the bottom right hand corner?  That's an etching of her drawing now known as "potato Duncan" after our cat which she loved, although it wasn't exactly mutual.  I have a pin of the same.  It was my older son's idea to put a kitty on her stone since she loved kitties.  When we asked him which one, he chose that one.  And so it is. 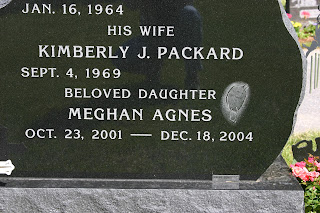 This is the back of her stone 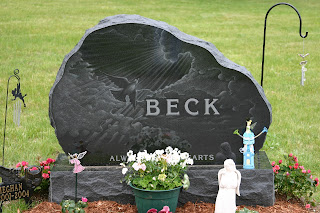 This is the front.  The etching idea came from a sympathy card we received. I really liked it so I asked if they could duplicate it.  Amazing. 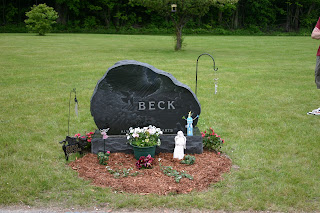 Meggie's Special Place is not just for pink Christmas trees.  We visit it on the 'usual' days.  Her anniversary, her birth day and holidays get special visits.  We have an annual birthday picnic there every October where we sing and dance and blow pixie dust for her.  We hang a pink glow stick every year for Halloween/All Souls Day.  The kitty angel marker is from the Sterling Animal Shelter for she is their 'kitty angel'.

In the first year after she died, her twin and I visited almost every day, at his request.  We needed to.  It was therapeutic and healing.  We'd talk about her.  We'd cry, we'd laugh.  He'd talk to her and bring her sticks.  He brought "Twinkle" the pre-school star of the week 'pet' to show her. We also visit it whenever we feel the need now.  He insists on being a part of the decorating.  I change the flowers and decorations with the seasons.  Her twin often selects the flowers. I've planted a tree.  We hang bird feeders and wind chimes.  The tokens of affection and remembrance people leave for her change over time.  We are blessed our cemetery allows us to decorate.  I can't imagine not being able to!

Little did I know the cemetery, Meghan's 'special place' would become such an integral part of our grieving and of celebrating her life.  That the boys would become so attached to it.  That we could have the celebration rituals we do now that take place there, instead of at our home.

The rites of passage in death; wakes, funerals, burials, having a place to go to 'visit' and remember is for those of us left behind.  My boys and I know she is not there.  We know she lives in our hearts and in our memories and we don't need a special place to feel her, remember her or honor her. Still, it's nice to have a place to call her own.  It's a peaceful and pretty place.  One we all connect to because of what we shared there nearly 8 years ago.

All special people deserve a special place, don't you think?  What will yours look like?  What do you want your loved ones to do to remember you at your special place?